The Story Behind the Picture: Flying Turkey

Many of you have commented on the pictures I post so I thought I would start telling the story behind some of the pictures.  For those who are interested in photography, this might give you some ideas on how to capture better photos.  If you're not that interested in the photographic part of it, I'll try to make the story interesting, maybe even amusing.

For my first attempt at TSBTP (just rolls off the tongue, yes?) let's look at today's picture "Flying Turkey": 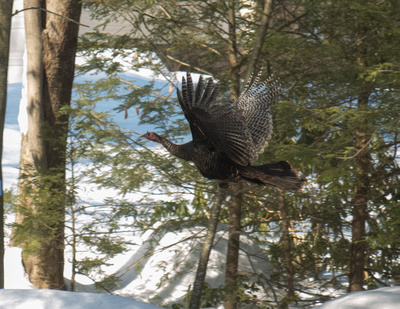 I'd like to say I lay in wait for hours in the freezing cold to get this shot but that would be an alternate fact.  In reality, I stepped out of the house to get the mail, only to see a couple of turkeys startle at the noise.  I stole quietly back into the house to get a camera.  The nearest one was an older Canon point-and-shoot ( a G15) and, time being of the essence, I grabbed it.  Stepping back outside I noted the turkeys were heading away from me into the woods between the house and the road.  I took a quick grab shot: 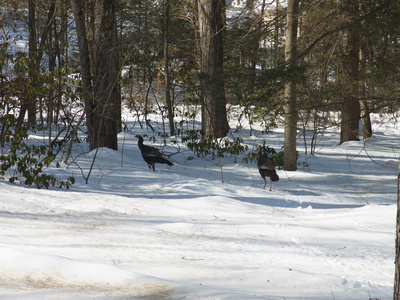 Boring.  Turkeys disappearing into woods.  Oh well, I thought, I'll go get the mail.  Maybe they'll try to cross the road and I'll have time to zoom in on them.

Now, here's the photographer part: as I'm heading up to the road I'm checking the settings on the camera.  I've got no real idea of what's going to be there to shoot so I set the thing on P mode.  P is Program mode (not Professional mode as some seem to think) and in P mode the camera takes over most, but not all, of the camera functions.  I know I won't have time to pick better settings so I'm letting the camera do that while I do the work of getting in a position to get SOME kind of picture.

When I get to the road, one of them flies UP OVER THE TELEPHONE LINES!  Whoa, cool!  I bring the camera up to try and get him but he's already in the neighbor's yard.  Now the other turkey takes off and I manage to get one shot off, no looking through viewfinder or at the LCD on back of camera -- just "point and shoot".  So here's the raw image, straight out of the camera:

It's a little overexposed but I can fix that in post-processing (yes, just like in the movies!).  And here's photographer thing #2: as is, the picture's not so hot.  Aside from the overexposure, the turkey is way to the right and the neighbor's house does not add to the "story".  By cropping out the house, driveway, and sign I've isolated the bird against a background of trees -- more in line with an "in-the-wild" theme.  Finding the "picture within the picture" can often turn the mundane into something interesting. 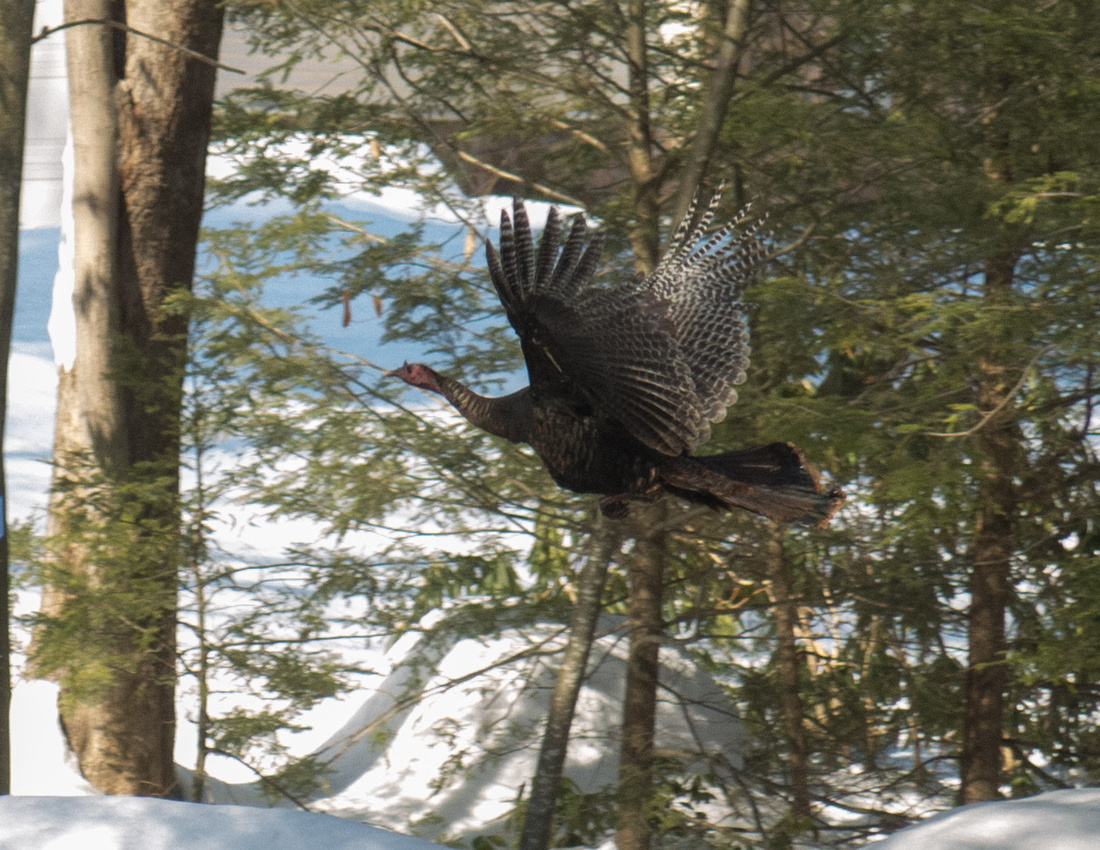