The Story Behind the Picture: Flyby

On a warm, winter Saturday I took a walk through Stanley Park in Westfield.  I had brought along a newer camera that I had been trying to get used to ( a Panasonic FZ1000) -- it was very convenient and easy to use but I wasn't convinced its quality was what I wanted for my photography.  I re-visited several areas where I had taken interesting pictures before, including the half-frozen stream just below the Japanese pavillion.  There I found a very small still life of a rock frozen in ice with a sprig of pine needle draped across it: 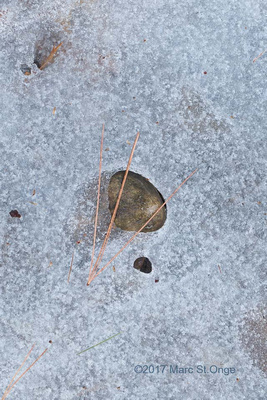 It didn't look like much but I knew I could work on it in Lightoom and Photoshop to eliminate the distracting element and emphasize the design.  Back at the computer, I first cropped it square to concentrate on the rock and sprig:

It just wasn't doing it for me.  The image wasn't sharp enough and nothing I did could fix it.  I posted it to Facebook and after getting a well-aimed comment (thanks, Paul) and much staring and pondering and messing around I decided I had to re-shoot it.  I knew there was something there I wanted but this wasn't it.

Sunday morning was different -- cloudy and cold.  This time I took a better camera and lens (if you're interested a Nikon D7100 with a 28-105 lens) and returned to the spot.  Well, yesterday's warm weather had taken its toll on the ice leaving me with a very different looking rock and no pine needle.  CONFESSION: This picture needed a pine needle sprig and since I had shot one yesterday I did not feel it would be photographically dishonest to add one to the rock.  That's my story and I'm stickin' to it.  The new image: 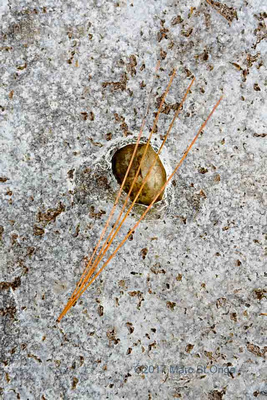 Different, yes, and better.  It needed, however, one more step to get it to where I wanted it -- tight cropping to emphasize the "swoop": 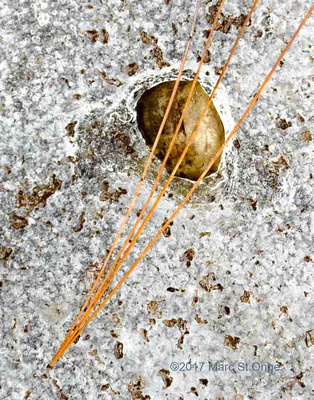 A little abstract but it had everything I wanted.  I've entitled it "Flyby" and dedicate it to Paul -- no Cokin filter involved here.